Muffin was not just the first star to be made by television. He was also the first children’s TV character to develop a merchandise range. These items are not that common as at the time many commodities were still in very short supply and thus resulted in low numbers being produced.

A number of companies seeking any opening to manufacture saw Muffin as a television related marketing opportunity and approached Ann Hogarth and Annette Mills suggesting that they should pay the companies for this privilege. Ann and Annette disagreed with this view and formed a company ‘The Muffin Syndicate Ltd’ to look after the commercial aspect. This was very much at a time when there was no model to follow, however, it was not long before several companies were happy to license from them! 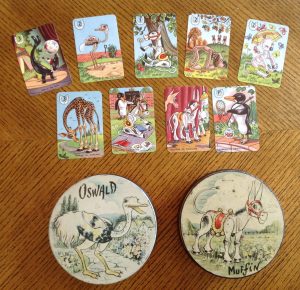 A wide range and variety of goods were produced from slippers (very rare) to lamps, to gramophones to calendars with the earliest copyright recorded being 1948 of a toy box. It appears that after Annette’s death in 1955 Jan Bussell became the 2nd partner and the company traded until the early 60’s. Some items can be found on eBay but beware the fakes! If you are interested in knowing more I would guide you to a book written by Adrienne Hasler ‘Muffin the Mule’ which gives great detail to the many products that were produced, their rarity as well as their relative value. 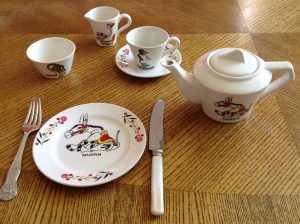