Muffin and his friends

Muffin and his friends19 February,2015Will 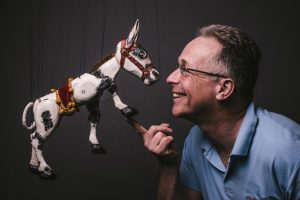 Muffin, I’m glad to say, has many friends of all sorts of shapes and sizes and he is rather like a big brother to them. He loves them all dearly and enjoys trying to help them out but he can tend to sulk or get cross if things don’t go his way. He is, however, easily ‘jollied’ out of these moods and is an intelligent mule with masses of enthusiasm for life. He is rather partial to a cup of tea and a slice of carrot cake (his favourite)! His friends all look to Muffin for guidance and despite his little ‘mischievous’ nature they would do anything for him too. Yes Muffin you can be quite cheeky!

All the friends have their own idiosyncrasies, but they respect them and each person’s way of doing things. They all get on extremely well and enjoy working together to solve mysteries and helping each other.


Please let me introduce you to some of his friends now: –

He is one of Muffin’s closest friends and has appeared in virtually all the programmes with Muffin. In fact I can’t think of an episode he hasn’t been in. He is very keen to help out but he does tend to interfere and comes across as quite short and bossy, although he does mean well. Peregrine is a very clever and important bird – well he likes to think so –  and spends most of his day working, occasionally on top secret things like, ‘How many sardines a penguin can fit into his mouth’! He doesn’t suffer fools lightly and will be more than capable of telling them so!

He must always be addressed by his full name and title otherwise he can get very cross and will snap his beak fiercely until you address him properly! He does remind me of an old school teacher of mine – but that’s another story which we can save for later!

Oswald the Ostrich & Willie the Worm

These two are best friends and inseparable! Oswald often carries Willie around in his mouth (a much quicker way for a worm to travel)! They love to bury their heads in Oswald’s sandpit for hours at a time – not particularly glamorous really as all you can see is a bottom and a tail sticking up!  I hope I’m not being too unkind to say that Oswald, although he is a very kind and caring Ostrich, is not the brightest of birds in the flock. Willie makes up for this though as he is very switched on and looks after his dear friend Oswald making sure he doesn’t get into any unnecessary scrapes. Unfortunately Oswald does have a tendency to walk around with his mouth wide open, and so it is often heard in the garden his friends calling out ‘Don’t gape Oswald’ which Oswald replies with a “Duh”. 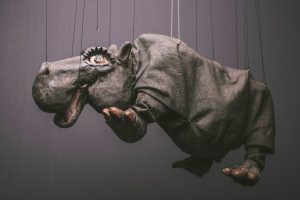 Hubert is a fantastic puppet and a great character. He has these wonderful fluttering eyelashes and a truly amazing mouth! As far as I can work out he does seem to have this tendency to fall fast sleep at the drop of a hat, which causes problems as hippos are so big and heavy! Well imagine if you had to work around a great big hippopotamus or even worse try to move one – it’s not easy you know! However, he can always be brought back to the present with a good song – one of his current favourites is ‘Mud, Mud’. I suppose that’s not surprising really, as a good wallow in a lovely mud bath is just so soporific – yawn. Makes me want to snooze just thinking about it!

Grace is incredibly elegant with her long neck and long eyelashes. She is very good friends with Louise the Lamb, and whenever they go out they make sure each other are always looking their best. Grace actually sent Louise back home the other day, stating that “…her curls weren’t tight enough AND a lamb must always look her best!” Poor Louise had to trot back and completely redo her fleece.

Grace loves nothing more than a good natter with her friends ‘chewing the cud’ over a spot of tea and a really good muffin – the edible variety of course!!! 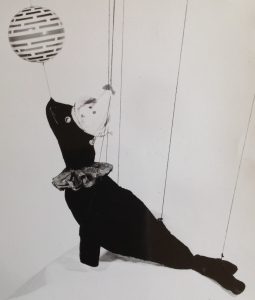 Sally has known Muffin the longest as she used to be part of the same circus troupe as him (even before he becomes known as Muffin). Sally is kind and caring and a born entertainer. She loves to perform and does some fantastic tricks with her ball often ending with a big splash! 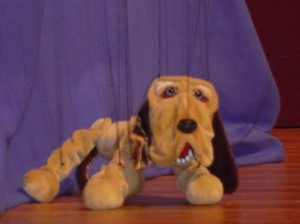 Peter is a wonderful character and has so much energy he just can’t sit still. He’s a bloodhound and has a very good sense of smell. He always wants to use it to try and help solve the mystery or the problem of each show. Although his enthusiasm to help can get him into trouble on occasions! Like the time when he decided to bury all the precious things his friends had as he wanted to protect them and keep them safe from getting lost – on the face of it this does sound like a good idea, but only if he can remember where he buried them!