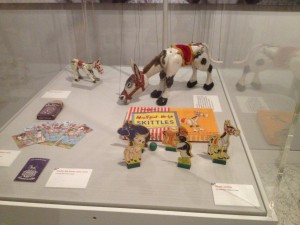 Muffin at the Herbert Art Gallery & Museum with some memorabilia.

Muffin is currently starring in the exhibition ‘The Story of Children’s Television from 1946 to today’. It is a major exhibition which celebrates children’s programming broadcast on all channels in Britain and hosted by the Herbert Art Gallery & Museum in Coventry (https://www.theherbert.org/).

Muffin travelled up early to prepare for the exhibition and I met up with him a couple of weeks later for the launch on 21st May (the day before the official opening). It was a fantastic evening and superb to see so many different stars from TV with the exhibition also showcasing original props and characters including Mummy Woodentop, The Wombles, Morph, Gordon the Gopher, Rastamouse and the singing veggies from Mr Bloom’s Nursery!

Muffin was displayed well with several bits of old memorabilia, a film of one of his old shows and lots of information of when he became a star which made him feel very much at home and kept him company. The exhibition is well worth a visit and runs throughout the summer to Sunday 13th September.