What a fantastic day and who would believe it – Yes 70 years ago to the day on Sunday 20th October 1946 Muffin the Mule first appeared on BBC TV with Annette Mills at the piano and Ann Hogarth pulling the strings. Who would have thought after that very first programme that Muffin would become such a star?
He was the first ever children’s TV character ? and the first show to have a merchandise range ?.

His popularity was quite astonishing considering TV’s were not common at all back then, and no one had even dreamt about the World Wide Web! 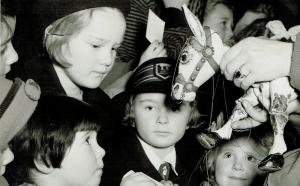 some adoring fans from the 40’s?