Will with Hubert the Hippopotamus at East Budleigh WI

What a wonderful evening at the East Budleigh WI. Almost like old times, with Muffin the Mule strutting his stuff again on stage as Will McNally pulled his strings and told his story. There were guest appearances from Oswald the Ostrich, Mr Peregrine the Penguin Esquire, Hubert the Hippopotamus, Peter the Pup and the elegant Grace the Giraffe, and not forgetting Willie the Worm! Will introduced them, and brought them to life to have a glimpse of their character and personality. The star was of course Muffin the Mule who had a fabulous time, particularly when everyone sung his song – ‘We Want Muffin, Muffin the Mule’. 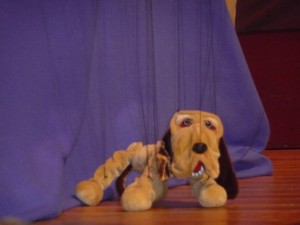 Peter the Pup on stage at East Budleigh WI